Posted in Student Accommodation by nido team on June 2, 2016

We were excited to be featured in La Repubblica’s article about Luxury Student Accommodation. See the Italian and English versions of the piece below.

Thanks to the arrival of many youngsters from China, Russia and Italy, London has changed their university housing offering for students. They seem to be similar to 5 Star hotels.

LONDON. Once upon a time there were student accommodations: run-down dormitories or small bedrooms, uncomfortable, pokey, crumbling. In other words, student accommodation at UK universities was disgusting. On the other hand, this was the rule not just in England, but all over Europe, America, anywhere: being an ‘off-site student’ away from their hometown and family, has always granted a great independence, the price to pay was accommodation lacking any comfort. It was part of the experience, a passage ritual, a little bit like doing a military service.

But now, at least in the UK, that ritual has been crushed, swamped by a new category of luxury student accommodation: more comfortable, decisively more modern and unavoidably priced. Partly because of the demand. The number of university positions in the UK continues to grow, despite the tuition fee raised to £9,000 per year. Foreign students are increasing, among which many Europeans and many Italians manly because British universities are considered (after the American Universities) the best on the planet.

The request of student accommodation has doubled, which has multiplied the market. Realising the greater earning potential, universities have expanded and improved their student halls, and real estate developers have entered the field, creating brand new private university residences. They are creating beautifully designed rooms and studio apartments with wooden floor, built-in kitchens, wi-fi, all with services including a gym, pool and gaming room, concierge and 24 hour security. Posh residences for students. Naturally they are expensive and on average rooms can cost double that of University student accommodation.

In London, a bedroom can cost from £1,000 to £1,500 per month (1,300 – 2,000€). Ten years ago 82% of students lived in university student halls. This has now gone down to 55% and continues to drop. According to the Economist, almost half of the student population prefer private student accommodation. The phenomenon is pushed by the boom of wealthy Russian, Chinese and Indian students now studying in London.

The same choice is being made by European parents, Italians included, which may not be millionaires, but make a sacrifice to ensure their kids are in a safe and comfortable place. Although, when they bring their kids for the first time to The Nido Student, the most beautiful and costly private student accommodation in London, mum and dad end up thinking: I wish I was still 20 years old.

Above, some images of The Nido Student student accommodation in London. Although it is among one of the most costly in the city, they provide students with studios with modern kitchen and all the comforts, including 24 hours security. Below the homepage of the student accommodation. 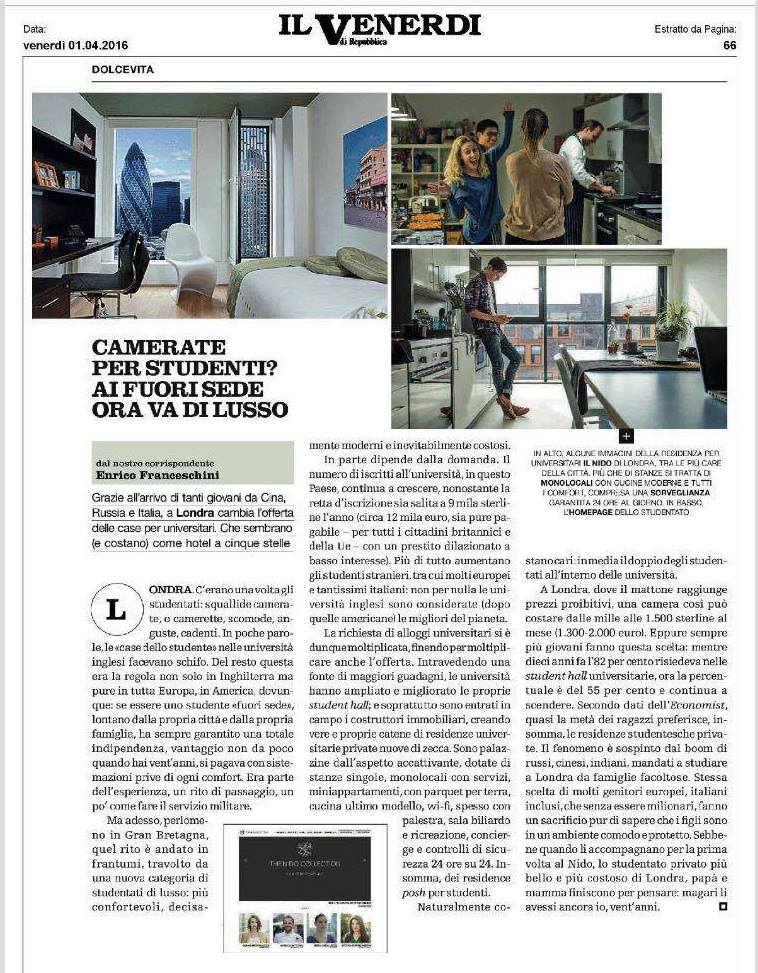